What is our Solar System made of?

According to the nursery rhyme, little boys are made of frogs and snails and puppy dog’s tails, whereas little girls are made of sugar and spice and everything nice!

But what about our solar system? What is that made from?

The Solar System formed from a swirling disk of dust and gas called the solar nebula. (Image courtesy of NASA)

Our solar system is believed to have formed from a cloud of dust and gas which collapsed under its own gravity – the solar nebula. A disk of dust and gas formed, at the center of which was a star, the Sun. The dust particles in the disk collided with each other and stuck together, eventually growing large enough to form the planets.

To try to understand exactly how our solar system formed, the processes that have occurred during its evolution and differences we observe between different planets, we need to start by addressing an important, fundamental question:

What was the starting material for the solar system? What was the average elemental and isotopic composition of the solar nebular? 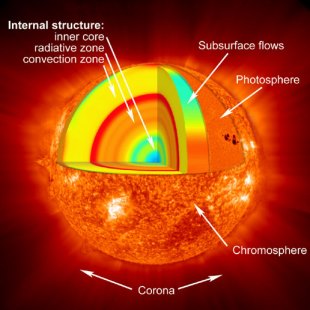 The photosphere of the sun is believed to represent the original composition of the average solar system. (Image courtesy of NASA)

But how do we collect a sample of the sun to analyse? It’s far too hot to send a space craft to the sun itself. The temperature at the core is about 15 million oC. The photosphere is about 5500 oC.

1 million tons of hot plasma, at temperatures up to 1.5 million oC, are ejected from the sun every second – this is known as the solar wind. The solar wind travels out from the sun into space. If you’ve ever seen an aurora, what you are actually seeing is the interaction of the solar wind with the Earth’s magnetic field. And it’s that magnetic field which protects us from the harmful effects of the solar wind. There have been some magnificent aurora over the last few days, as a massive burst of solar wind known as a Coronal Mass Ejection (CME) reached the Earth. Usually aurora, often known as the Northern or Southern Lights, are only visible close to the polar regions, but the recent aurora have been visible across large parts of northern Europe. Sadly it was too cloudy to see anything here in Manchester, but there are some amazing pictures on the National Geographic website

I'm a Post Doc in the Isotope Geochemistry and Cosmochemistry group. I study xenon isotope ratios using the RELAX mass spectrometer, to try to learn more about the origins and evolution of our solar system. I look at a wide range of samples from solar wind returned by NASA's Genesis mission to zircons (some of the oldest known terrestrial rocks), from meteorites to presolar grains.
View all posts by Sarah Crowther →
Gallery | This entry was posted in Background Science, Space and tagged Aurora, Genesis, Solar System, Solar Wind. Bookmark the permalink.

3 Responses to What is our Solar System made of?