The Moon is approximately ~4.5 billion years old.  During this time it has experienced significant bombardment from asteroids and comets. Such high-velocity bombardment causes damage to the local bedrock through the passing of high pressure shock waves during the impact event.  In this new study, our team in Manchester, in collaboration with the University of Oxford, have characterised the extent of shock induced damage of samples from the lunar highlands. The study aims to understand how the Moon’s surface has been modified by such processes, and how this effects our understanding of the formation of the Moon’s crust. 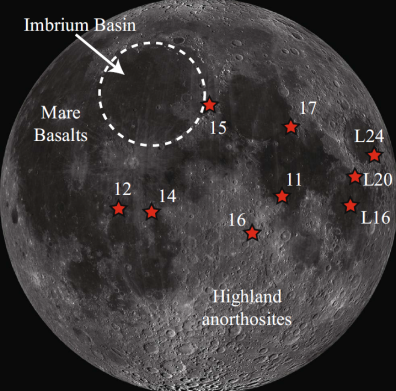 The lunar highlands are the bright grey/white areas of the Moon we see in the night sky (see map above). The rocks in these areas are known as anorthosites and were sampled extensively by the Apollo 16 mission. Anorthosites are made up predominantly of a white mineral called plagioclase – an igneous mineral, also commonly found on Earth. The gallery below displays a selection of anorthosite samples collected during the Apollo 16 mission. Sample pictures below are from NASA’s Lunar Sample Compendium, a fantastic free resources summarising the geology and chemistry of all collected Apollo samples.

To characterise impact shock pressures we used a Fourier-Transform Infrared (FTIR) Spectrometer (details of which can be found in one of our previous blog posts) to investigate the infra-red wavelength signatures of plagioclase from a number of anorthosites from the Apollo 16 suite.  The infra-red spectra of plagioclase is very sensitive to shock, thus is an ideal shock-barometer.  On the whole, our analyses indicate that highland samples are not that shocked, surprising considering the >4 Ga age of these samples.  On the whole samples investigated range from unshocked to moderately shocked (~12 GPa).  Very few examples of high shock (> 30 GPa) modification was found.

The lunar highland anorthosites are some of the oldest rocks from The Moon, and are important for understanding lunar formation.  Indeed, these rocks are thought to be part of the first lunar crust to have formed. Understanding the formation histories of these rocks are generally done by studying their chemical makeup. However, it has been speculated that impact shock damage can redistribute elements within the minerals that makeup the rock.  Therefore, this could potentially lead to inaccurate interpretations.  To test this, we selected one sample that displays a range of shock damage states (as measured by FTIR), and coupled this with new chemical analyses (see figure below). Whereas, overall, no strong correlations were found, some weak correlations between shock and chemistry were observed.  This strongly implies that caution should be used during chemical investigations of lunar rocks before inferring information about the age and histories of such samples.

Why we should go back and explore the Moon in the future https://earthandsolarsystem.wordpress.com/2017/05/12/the-moon-putting-an-end-to-been-there-done-that/

John is a researcher within the Isotope Geochemistry and Cosmochemistry group, and has a love of all things lunar!
View all posts by John Pernet-Fisher →
Gallery | This entry was posted in News, Uncategorized and tagged Apollo, Apollo 16, ftir, highlands crust, lunar meteorite, Moon, shock, Space. Bookmark the permalink.