New paper: A robotic mission concept to return samples from the Schrödinger basin.

The Schrodinger impact basin: A diverse target site for a human-assisted robotic lunar sample return mission which is located on the far side of the Moon and near to the South Pole.

It has been over 40 years since man last stood on the Moon and returned lunar samples to Earth.  The 12 brave astronauts returned 382 kg of samples (with an extra 0.326 kg from Russian Luna missions), analysis of which has revealed an overwhelming understanding and insight into the origin and evolution of the Earth-Moon system (and the inner solar system). Even more importantly, with the continuing advancement in technology and analytical techniques, these precious Moon rocks are the gifts that keep on giving. It is this that keeps us eagerly turning up to the lab each day to reveal the ancient secrets preserved within the Moon rocks.

However, these samples are all from regions limited to the near side and largely to equatorial locations.  Aside from lunar meteorites that are incredibly difficult to accurately locate their provenance, there is a significant gap in the lunar sample collection required to address the outstanding scientific questions surrounding the origin and evolution of the inner solar system.  Such questions are presented in the 2007 report: Scientific Context for the Exploration of the Moon by the National Research Council (summarised here) which are supported and agreed upon internationally by the lunar and planetary scientists.

So, with so much still left to learn from our nearest neighbour, the biggest question must be, “why have we not returned?” Well, fortunately the lunar and planetary community are rallying together and pushing to get back to our faithful satellite.  Here at Manchester we are doing our bit too, and Dayl and I are authors on a new paper regarding our internship work that contributes toward helping to make the lunar return a reality.

Oblique view of the pyroclastic vent from which pycritic glass beads are erupted. These beads are suspected to be a major source of volatile species and ilmenite. Analysing samples from this site can address the thermal and magmatic evolution of the Moon, and the potential for in situ resource utilisation.

It has been a year since Dayl and I stepped away from our everyday lab work and research at Manchester University to board a plane bound for Houston. On arrival we met fellow Earth and Planetary Science students from around the world ready to become the 2015 Exploration Science Summer Interns at the Lunar and Planetary Institute. Over ten weeks we busily worked with our new colleagues and in collaboration with interns from Boeing to address the challenges of a very much overdue lunar sample return mission to the Moon.

Our 3-year long-term mission was planned in line with the ESA-led HERACLES concept and importantly targets the Schrödinger basin (see flyover video of the basin here). Schrödinger is the second youngest impact basin on the Moon and is situated within the South Pole-Aitken basin (the oldest and largest impact basin) on the far side of the Moon. With no current infrastructure for humans to revisit the lunar surface, the focus is on a human-assisted robotic sample return concept. 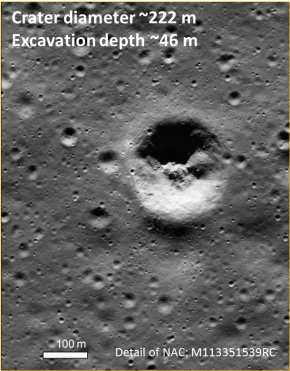 Crater within the impact melt sheet. Sampling from ejecta of varied sized craters yields samples from different depths within the melt sheet, providing detailed information on its composition and potential stratification.

The new paper is published in the journal ‘Advances in Space Research’ and presents two proposed routes for a lunar rover. Sampling strategies for each route are also addressed, which were determined using multiple remote sensing data sets, lunar reconnaissance orbiter imagery, and mechanical calculations. The traverses include the collection of high resolution images, conducting in situ analytical measurements, and most significantly, returning at least 30 kg of carefully identified diverse samples for laboratory analyses back here on Earth.

The proposed mission would return the first samples of far side material, the first South Pole-Aitken basin material (most likely preserved at the south east wall of the Schrödinger basin and within secondary craters), the first unaltered basin melt sheet, two igneous lithologies, and samples from the mid- to deep-crust. Analysis of the samples aims to address the potential for in situ resource utilisation, test the magma ocean hypothesis, understand the formation mechanisms of peak ring structures and sinuous rilles, and to gain a better understanding of the chemical and thermal evolution of the Moon.

All of this information can provide a wider understanding of the origin of the Moon and other terrestrial rocky bodies, including our very own planet Earth.

The internship was possible due to the support and funding from the Universities Space Research Association (USRA), the NASA Solar System Exploration Research Virtual Institute (SSERVI), the Centre for Lunar Science and Exploration (CLSE) and the Lunar and Planetary Institute.

12 Responses to New paper: A robotic mission concept to return samples from the Schrödinger basin.