As something new on our blog, we thought we’d start updating readers when new papers or conference abstracts from the group are published.

As many papers are published open access, the majority of our papers should be available online to everyone.

Noble gases and halogens in Graves Nunataks 06129: the complex thermal history of a felsic asteroid crust. 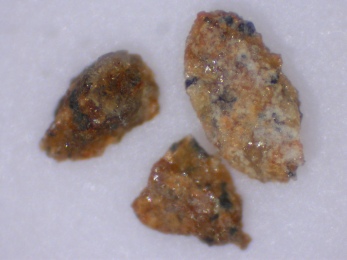 The meteorite Graves Nunataks (GRA) 06129, and its pair GRA 06128, are the only known examples of felsic asteroidal crust. Understanding the history if these meteorites can help shed light on the evolutionary processes of planetesimals. Studying noble gases in meteorites can constrain the chronology of meteorites and help us to understand the behaviour of volatile elements on asteroids. This paper looks at the I-Xe and Ar-Ar systems in GRA 06129, which suggest a complex thermal history for this meteorite and its parent body.

This research was funded by STFC.

I'm a Post Doc in the Isotope Geochemistry and Cosmochemistry group. I study xenon isotope ratios using the RELAX mass spectrometer, to try to learn more about the origins and evolution of our solar system. I look at a wide range of samples from solar wind returned by NASA's Genesis mission to zircons (some of the oldest known terrestrial rocks), from meteorites to presolar grains.
View all posts by Sarah Crowther →
Gallery | This entry was posted in News, Space and tagged Ar-Ar, Argon, GRA 06128, GRA 06129, I-Xe, RELAX, Xenon. Bookmark the permalink.