Oh yes, Chang’e 3 has successfully made its descent to the lunar surface, and how soft it was. Exciting stuff, as yes this really is the first time something has visited (and not crashed into) the moon in 37 years. 37 years WOW…think of all that new technology!! Between you and me I think the Moon thought we forgot about it 😕

China is ONLY the third country to have completed a soft landing on the Moon (only ever performed by US and Soviet Union) and within the next few days will have a rover exploring the surface.

Early images and press releases have China’s first rover mission landing between Mare Imbrium and Sinus Iridium, great stuff considering the expected target was the Sea of Rainbows (Sinus Iridium – See Images). Solar panels have been successfully been deployed and there were smiles all around the control center in Beijing. 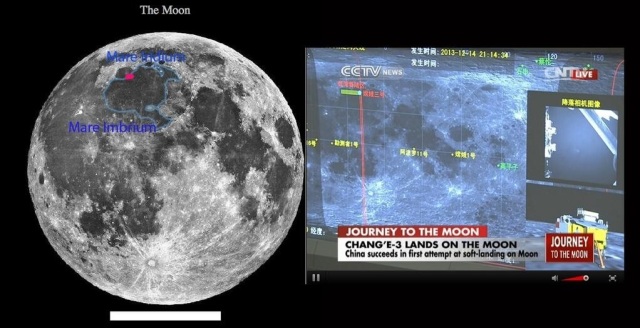 The stationary lander, home to the Chinese rover YUTU (or Jade Rabbit in translation), has instrumentation to observe earth and other celestial objects from the moon, as well as keep a watchful eye over YUTU. The lander has a plutonium powered nuclear generator to keep itself warm through the cold lunar night-time (approximately 2 Earth weeks), trust me it’s quite chilly up there when the sun hides away. The rover will hopefully be released in a few hours to days to look at the surface geology, natural resources and overall exploration of the Moon. Yutu is host to a number features such as solar panels for electrical power, a robotic arm for in-situ scientific measurements, a 3D stereo camera and radar system to navigate the lunar surface.

The YUTU rover in the Lab!!

The mission will last at least 3 months with 3 main aims:

Chang’e 3 follows the successful Chang’e 1 and 2 that launched in 2007 and 2010 respectively. Chang’e 2, which provided recon for the Chang’e 3 mission, is still active and is currently heading for deep space and will possibly be one of China’s longest voyages in space with an expected distance of around 300 million km from Earth…WOW!!

Hopefully this is only the first steps for China to bring back some of those lovely rocks from the Moon surface with one of their next expected Chang’e missions…and this could be as early as 2020. I for one wish China all the best and hope this is the start of our ‘Apollo’ era!!! Congratulations on such an incredible achievement…back to the Moon we are!!!

Here is some cool footage of the first images of the lunar surface from Chang’e 3. Stay tuned to the blog as we will also be keeping a watchful eye on the rovers progress.