Last time we talked oxygen; this week it is nitrogen’s turn. Analysing the isotopic composition of nitrogen in the solar wind was the second highest priority science objective of the Genesis mission.

Nitrogen has two stable isotopes: 14N and 15N. A wide variation of nitrogen isotopic compositions are observed in solar system materials, but the extent and origin of these variations are unknown. The 15N/14N ratio in samples returned by the Apollo missions appears to vary with age for samples from the lunar surface. The reasons for this remain a mystery. Was there a systematic change in the isotopic composition of solar wind nitrogen? Or are there non-solar sources of nitrogen on the surface of the Moon? 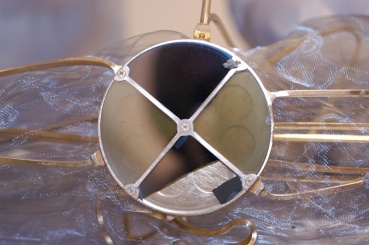 Genesis Solar Wind Concentrator. This photo was taken after the mission, note that one quadrant was damaged by the landing. Image: JPL/NASA

Researchers from the Centre de Recherches Pétrographiques et Géochimiques (CRPG), in Nancy, France have analysed parts of the Genesis Solar Wind Concentrator to determine the isotopic composition of solar wind nitrogen. The Concentrator is an electrostatic “mirror” that focused the solar wind ions onto a smaller area, increasing the concentration of light elements in the solar wind relative to background contamination.

The 15N/14N ratio measured in this concentrator is the lowest ever measured for any solar system objects –comparable to Jupiter’s ratio, but lower than that measured for the Earth, Moon or Mars.

Variations in isotopic composition of nitrogen observed in meteorites are consistent with a 15N-rich component hosted in organic material and a 15N-poor component derived from the presolar nebula.

Next time, in the final post in this series, we’ll look at the noble gases, in particular xenon (my favourite 😉 )

I'm a Post Doc in the Isotope Geochemistry and Cosmochemistry group. I study xenon isotope ratios using the RELAX mass spectrometer, to try to learn more about the origins and evolution of our solar system. I look at a wide range of samples from solar wind returned by NASA's Genesis mission to zircons (some of the oldest known terrestrial rocks), from meteorites to presolar grains.
View all posts by Sarah Crowther →
Gallery | This entry was posted in Background Science, Space and tagged Genesis, Nitrogen, Solar System, Solar Wind. Bookmark the permalink.