Hello readers! It’s been a busy week in the world of planetary science and there’s a great deal to tell you about! Without further ado, here are a collection of the amazing stories released this week:

Imagine, you are organizing a worldwide observation of a cosmic phenomenon and just as you start the observation, something quite spectacular happens. That’s exactly what happened when a programme of telescopes (ranging from radio to gamma-ray spectral ranges) gathered together to observe the Blazar Markarian 421. A ‘staggering’ flare-up has been observed coming from the supermassive black hole hosted in this Blazar. This is an unprecedented opportunity to observe these phenomena and it just happens to be happening at the same time as the American Physical Society meeting in Denver.  Read the full article here: Blazar Markarian 421’s flare-up is cosmic coincidence

Boldly Going Where No Man Has Gone Before

You may remember our report on the private sector attempts to send and elderly couple to Mars and back in 2018, well there’s now another organization moving in to take up that challenge. This mission however, has a very distinct difference. The move is permanent. The organization Mars One has some pretty cutting edge technology on their side but ultimately this mission will rely on the ingenuity and resolve of the crews sent to Mars. Read more about it here: Applicants wanted for a one way ticket to Mars. Or read the original article we reported on here: US private sector hopes to send older couple to Mars.

Using the Stratospheric Observatory for Infrared Astronomy, researchers at NASA have captured a glimpse of a massive star forming within a dense cloud of dust and gas. The surprise comes with how ‘normal’ this star formation is compared to smaller stars. It was once expected to be a much more chaotic process than the smaller stars display but these observations refute that hypothesis. Read more about it here: SOFIA Observations Reveal A Surprise In Massive Star Formation.

Just a brief mention of the three events happening later today; although I’m sure if you haven’t read this by the time the event has happened, there will be copies of it all over the internet. The first is the media briefing to discuss the Kepler mission’s planetary discoveries at 2 pm EDT and the second is the MSL Curiosity Rover lecture at 6:30 BST. Finally, Lori Garver (NASA’s Deputy Administrator) held a Q&A session on Twitter and Reddit yesterday. Be sure to check out the many interesting questions and her fascinating responses.

Watching The Skies Closer Than Ever Before

The latest technology designed to help the detection and tracking of Near Earth Objects (NEOs) has passed a critical testing stage in its development. The sensor, called NEOCam is said to be the ‘cornerstone instrument’ for a new space based telescope designed to detect and track asteroids that may be of a threat to Earth. Read more about it here: NASA-funded asteroid tracking sensor passes key test.

Earth’s magnetosphere protects us from all sorts of dangerous radiation that would have scoured life from the surface of the Earth long ago without this field in place. NASA is continually sending spacecraft up to investigate the changes in how energetic particles are affected when moving through this barrier. This article discusses a strange phenomenon, abbreviated to SLAMS, whereby short large amplitude magnetic structures were observed in the data collected by the NASA Wind spacecraft between 1998 and 2002. Read more about these phenomena here: NASA’s wind mission encounters ‘SLAMS’ waves.

Originally I didn’t think I would be posting this in time to alert you all to the upcoming Antares rocket launch. However, due to a premature uncoupling of the second stage umbilical, the launch has been delayed. New estimates predict a launch no earlier than Friday 19th April at 5:00 pm EDT. Live coverage will commence at 4:30 pm, be sure to tune in and watch the launch! For more details: Antares launch reschedule

And finally, I leave you with an extreme UV image of the Sun- which gave out its largest recorded solar flare of 2013 last week. Not to mention, it looks like a pretty impressive picture! 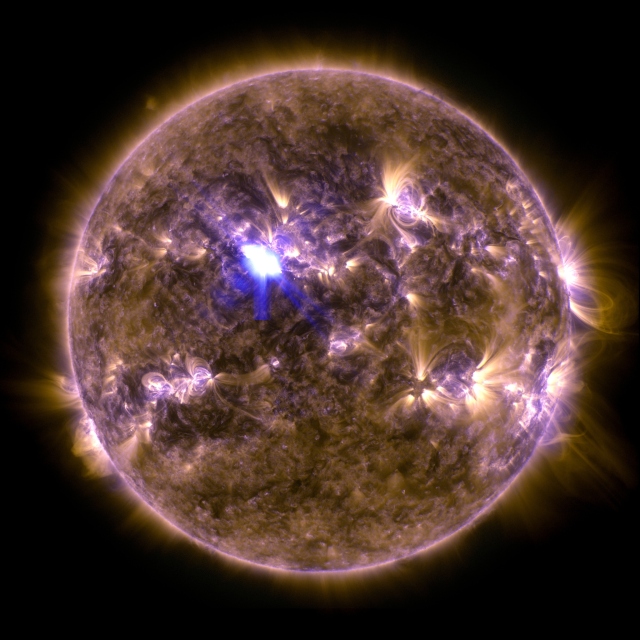 Taken on the 11th of April, this image shows the Sun giving out its largest solar flare of 2013 so far. This image compiles false colour images from the extreme UV range. Image Credit: NASA