Tuyas: Land based “tide marks” delving into the climate history of Iceland

Posted on February 12, 2013 by kathrynstreet

Subglacial volcanoes.  What are they you might ask?  Well this week our blog is taking a different turn and I’ll be explaining what a certain type of subglacial volcano called tuyas are and how they’re formed.

Tuyas are volcanoes that have erupted underneath ice plates or glaciers.  They are usually equidimensional being fairly circular in shape and have characteristically steep sides with the top of the volcano having a flat cap; which is also why they can be called table mountains.  Tuyas are found in Antarctica, Canada, USA and Iceland.  My PhD research is specifically based on the tuyas in Iceland and figuring out how old these volcanic formations really are.

The tuyas in Iceland don’t actually have reliably dated ages thus far.  To find their ages I’ll be using a fairly new technique by analysing the helium trapped in the lava produced by these tuyas, but I’ll go into the technique of dating them at a later date.  For now I want to tell you about how these subglacial formations are produced.

Iceland sits on a hot spot or “plume” which is also on the mid atlantic ridge.  This ridge is where the Eurasian and North American tectonic plates are moving away from each other which creates spreading of new land above.  The plume is where very hot less dense magma rises to the Earth’s surface which is what is responsible for the high volcanic activity seen on Iceland.  It is actually under scientific debate as to whether plumes really do exist or not but that’s a debate for another time.

Between around 20 and 100 thousand years ago the northern hemisphere was extremely glaciated (covered in ice).  The spreading of the two tectonic plates would cause fractures and stresses, which open up fissures (cracks) in the land.  These breaks in the land allowed a release of magma up onto the Earth’s surface which was then covered in ice.

The first step of these volcanic formations starts with the release of magma under the ice (subglacial).  The magma will then melt the ice directly above it creating a small cavity of water and due to the immense pressure of the ice above (it will have been up to a few 100 metres thick) the lava produced is pillow lava. Pillow lava gets its name due to the pillowy shapes it produces.  At this stage it’s erupting into the water which has melted at the base of the ice. 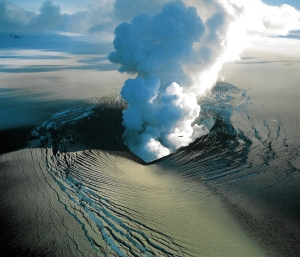 The next stage is when the pile of lava is big enough to cause the ice to melt through to the ice surface.  This creates a huge relief in pressure and so now allows the eruption to become explosive and releases steam and ash into the air which covers the pillow lava produced at the base.  As the ice has melted through to the surface, an intraglacial (inside the glacier) lake will be formed at the surface.

The third stage occurs when the explosive eruption of ash and steam subsides, usually due to the fact that the lava has now piled high enough so that the vent is now out of the water/lake.  Lava then flows out of the vent and down back into the water surrounding it.  This transition of lava erupting out of the water but flowing back into water is seen clearly on tuyas and is called the passage zone.  This passage zone is a helpful indication as to how thick the ice was at the time of eruption.  You could say it’s a “fossilized water level”.

The final stage is when the tuya is large enough that the lava cascades over the top of the earlier formations (now out of the meltwater) and creates the flat cap on the top.  This lava cap is created with pahoehoe (said pahoyhoy) lava which is similar to pillow lava but produced in the air instead of under water. 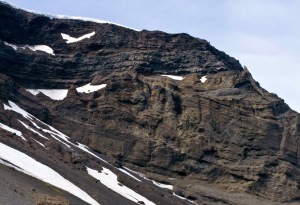 Once the ice retreats, all that are left are these steep sided flat capped tuyas.  These land markers give an idea into ice thickness and furthermore into what the climate really was like thousands of years ago.  These land based markers create a nice alternative to other climate records such as ice cores and marine sediments.

6 Responses to Tuyas: Land based “tide marks” delving into the climate history of Iceland