Xenon in Zircons: Unravelling Their History 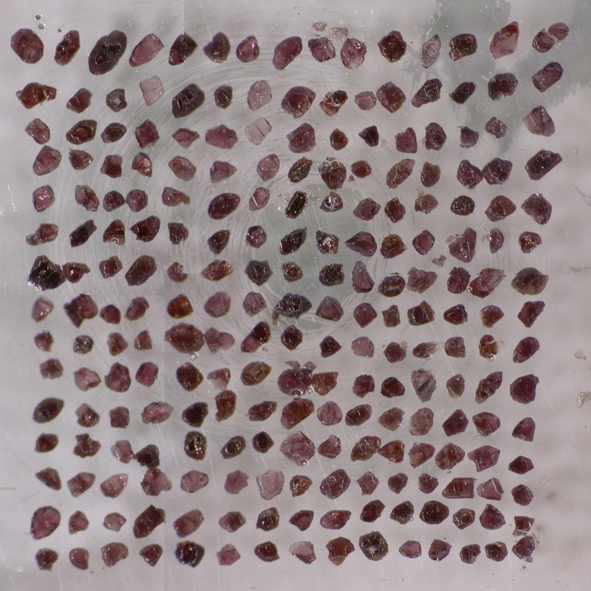 Individual zircons mounted in epoxy. The mount is roughly 1 cm across. The individual zircon samples are typically 50 - 200 μm in diameter. Ion probe analyses are carried out on the individual samples in the mount, but the zircons have to be removed from these epoxy mounts prior to irradiation and xenon analysis.

A short time ago I wrote about some of our work analysing the xenon in zircons from the Jack Hills region of Australia, the oldest known material on Earth.

If you think trying to unravel xenon contributions from 2 sources (244Pu and 238U) was complicated, then you’d better hold on tight because there’s more to come. It turns out that 244Pu and 238U only tell us part of the story…

Unlike 244Pu and 238U, 235U does not undergo spontaneous fission. But if we put it in a nuclear reactor and bombard it with neutrons, we force it to undergo a decay process known as neutron induced fission. One of the products of neutron induced fission is – yes, you’ve guessed it – xenon, and another unique xenon isotopic signatureis observed, again dominated by the heavier isotopes. 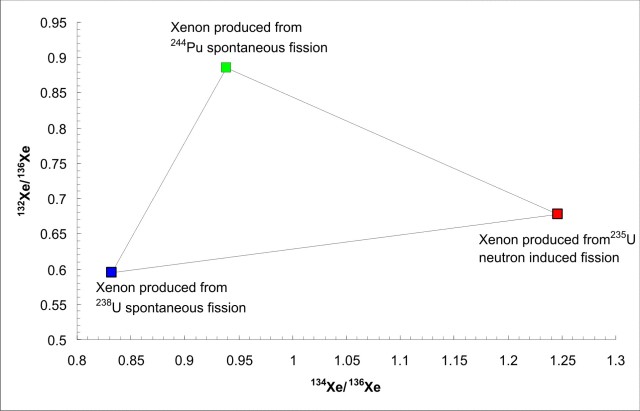 Neutron induced fission of 235U (red) produces a different xenon signature to those produced by spontaneous fission of 238U (blue) and 244Pu (green).

So some of the zircons were put into a research nuclear reactor and bombarded with neutrons before being analysed. We are then able to measure the xenon contributions from 235U as well as those from 238U and 244Pu. So now things get more complicated as we have 3 components to unravel in the xenon isotopes, rather than 2. But the extra information available is worth the added complications.

The yellow triangle illustrates where xenon ratios measured in a typical zircon. The measured ratios are a mixture of xenon produced from spontaneous fission of 244Pu and that of 238U.

As discussed in the previous post, the initial Pu/U ratios of the solar system can be determined from the ratio of xenon produced from fission of 244Pu to that from 238U. But if these zircons had lost xenon at some point in their 4.5 billion year history, the calculated Pu/U ratios would be incorrect.

If the zircons are irradiated before analysis, a third component from neutron induced fission of 235U is added. This moves the measured ratios away from the mixing line between 244Pu and 238U, into the middle of the triangle.

An alternative way to estimate the Pu/U ratio is from the ratio of xenon from spontaneous fission of 244Pu to that from neutron induced fission of 235U. Using this method, xenon loss would only affect the estimate of the 244Pu abundance but not that of 235U. If the two estimates of the Pu/U ratio for a given sample agree, that sample has not lost any xenon through its history; if they do not agree,  some or all of the xenon must have been lost at some point in history.

A U-Xe age can also be calculated for the samples, from the ratio of xenon produced from spontaneous fission of 238U to that from neutron induced fission of 235U. The majority of samples analysed had lost some of their xenon at some point, and the U-Xe age calculated is between the formation age and the time of partial loss. Partial loss is evident where xenon from the decay of 244Pu is identified, but the U–Xe age corresponds to a time after the complete decay of 244Pu.

This project is ongoing, and as we continue to analyse further samples we hope to refine the Pu/U ratio of the early solar system along with models of how and when the zircons lost xenon.

I'm a Post Doc in the Isotope Geochemistry and Cosmochemistry group. I study xenon isotope ratios using the RELAX mass spectrometer, to try to learn more about the origins and evolution of our solar system. I look at a wide range of samples from solar wind returned by NASA's Genesis mission to zircons (some of the oldest known terrestrial rocks), from meteorites to presolar grains.
View all posts by Sarah Crowther →
Gallery | This entry was posted in Earth and tagged Jack Hills, RELAX, Xenon, Zircons. Bookmark the permalink.