The oldest thing on Earth

Jack Hills, Western Australia – a hot, dry and barren place where very little lives. But it is here that the oldest known materials on Earth have survived from shortly after the formation of the Earth until the present day.

The pink marker shows the location of Jack Hills. 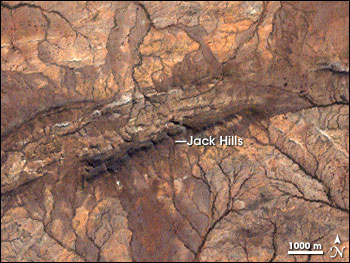 4.4 billion year old detrital zircons are the oldest material on Earth that has ever been dated. They originate from the Jack Hills region of Western Australia. These ancient fragments of the Earth’s crust formed only 150 million years after the Earth itself and can tell us much about the early history of our planet.

As part of a project in collaboration with colleagues at the Institute of Geophysics and Planetary Physics (IGPP) at UCLA, we are analysing the xenon isotopic composition of these tiny but fascinating samples which give us an insight into the very earliest days of the Earth.

Plutonium (Pu) is the heaviest of the primordial nuclides. 244Pu, a radioactive isotope of plutonium that decays by a process known as spontaneous fission, was present in the early solar system. It has a short half-life (in solar system terms) of 82 million years, therefore was extinct within 600 million years of Earth’s formation. One of the products of spontaneous fission of 244Pu is xenon and we can see evidence of 244Pu by looking at the isotopic composition of the xenon in the zircons. The presence of this xenon in the zircons we are investigating means they formed in the period when 244Pu was still alive in the solar system, and have survived to the present day.

Uranium (U) is another important element that was present in the early solar system. The most abundant isotope of naturally occurring uranium is 238U. Similarly to 244Pu, 238U is radioactive and decays by spontaneous fission.  Again, one of the products of this decay is xenon, and we can see evidence of its decay in the isotopic composition of xenon measured in zircons. But with a much longer half-life of 4,468 million years, 238U is still evident in the solar system today and is found in measurable quantities in zircons.

Fission of 244Pu and 238U each produce a unique xenon isotopic signature. Fission produces the heavier isotopes of Xe, mainly 132Xe, 134Xe and 136Xe, resulting in very different isotopic compositions than that observed in our atmosphere. 132Xe is the most abundant isotope in the atmosphere, whereas 136Xe is the most abundant isotope produced by fission of either 244Pu and 238U, and so different patterns are observed in the mass spectrum of fission xenon compared to that of atmospheric xenon. 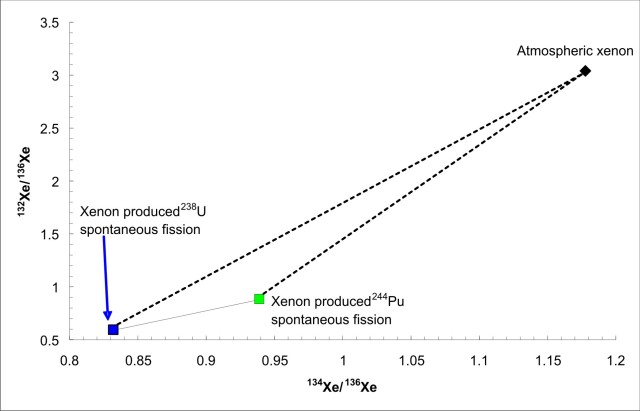 The xenon trapped in the zircons was measured using the RELAX mass spectrometer. The isotopic composition of the xenon is then unravelled to determine the contributions from 244Pu and 238U and hence the initial Pu/U ratio of the Earth. This ratio is a key parameter that controls mathematical models of volatile transport within and from the mantle and also models of the origin and evolution of the Earth’s atmosphere.

Mass spectrum of atmospheric xenon (left), and a typical xenon spectrum measurement for a zircon (right). The xenon in the zircon spectrum has been produced by spontaneous fission of 244Pu and 238U.

I'm a Post Doc in the Isotope Geochemistry and Cosmochemistry group. I study xenon isotope ratios using the RELAX mass spectrometer, to try to learn more about the origins and evolution of our solar system. I look at a wide range of samples from solar wind returned by NASA's Genesis mission to zircons (some of the oldest known terrestrial rocks), from meteorites to presolar grains.
View all posts by Sarah Crowther →
Gallery | This entry was posted in Earth and tagged Jack Hills, RELAX, Xenon, Zircons. Bookmark the permalink.

2 Responses to The oldest thing on Earth