RELAXing in the lab

RELAX is an instrument used to measure xenon isotope ratios. Contrary to popular believe, this does not mean we sit around the lab with our feet up all day!

RELAX stands for Refrigerator Enhanced Laser Analyser for Xenon. It is a unique instrument originally designed in the 1980’s, which is continually being improved. It is the world’s most sensitive instrument for measuring xenon isotope ratios. RELAX can detects just a couple of thousand atoms of xenon, a tiny amount when compared to approximately 1,000,000,000,000,000,000 atoms of sodium and chlorine in a single grain of salt.

2 important features contribute to the high sensitivity of RELAX:

RELAX is a time of flight mass spectrometer – the isotopes are separated out according to mass because the lighter isotopes travel faster and reach the deterctors before the heavier isotopes. 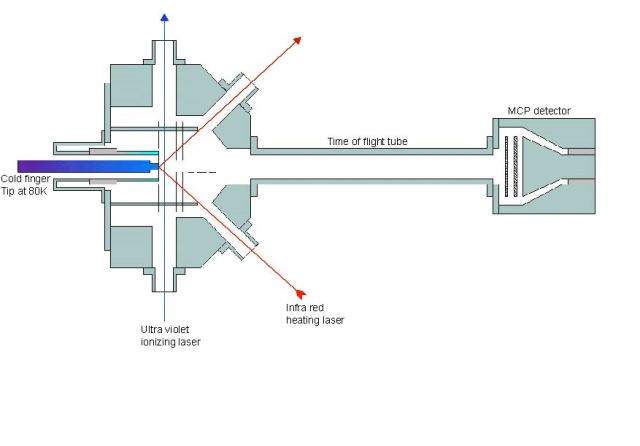 Gas in the mass spectrometer condenses on the cold spot, and is then released every 1/10th of a second by a pulse from the infra red heating laser. The ultra violet ionising laser fires through the resulting concentrated plume of gas, selectively ionising only xenon. Xenon ions are separated out by mass as they are accelerated down the fligh tube, with the lighter isotopes arriving at the detectors first.

I'm a Post Doc in the Isotope Geochemistry and Cosmochemistry group. I study xenon isotope ratios using the RELAX mass spectrometer, to try to learn more about the origins and evolution of our solar system. I look at a wide range of samples from solar wind returned by NASA's Genesis mission to zircons (some of the oldest known terrestrial rocks), from meteorites to presolar grains.
View all posts by Sarah Crowther →
This entry was posted in Laboratory and tagged RELAX, Xenon. Bookmark the permalink.

9 Responses to RELAXing in the lab